Guess Who's Back? Rambling Again. 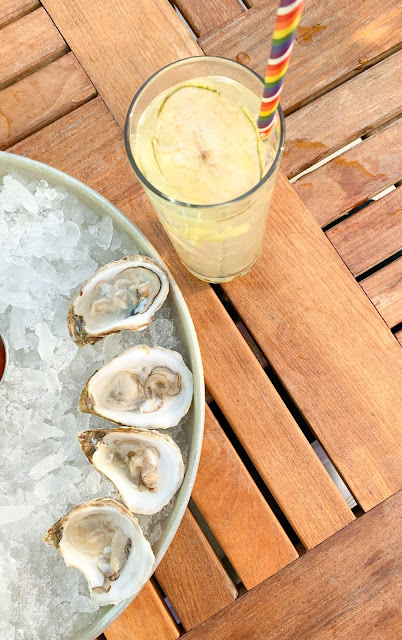 Is there a more culinarily perfect snapshot of summer than fresh oysters and a colorful cocktail?

Sure, there probably is, but this will suffice. I always associate oysters with summer, but then I found out that you're only supposed to eat oysters in months that contain the letter "r." September - April; the damn near opposite of summer. Basically, I've been eating them in the dangerous summer months like a fool. Then why do so many places do buck-a-shuck in the summer?? Are they trying to cause a foodborne illness?

Recently I read that old adage isn't really relevant anymore b/c we (humans) are messing with the natural season of pretty much everything. Maybe wild oysters are better and safer in months ending in "r," but the majority of oysters now are farmed. So now I can slurp oysters on the half shell year round without losing any sleep at night (Please. Have you seen my order at Taco Bell? This stomach doesn't scare easily).

Buck-a-shuck specials or not, this year is going to fly at warp speed. We're already halfway through it, which is bonkers. Brent and I don't have any concrete summer plans, and I'm starting to get antsy. I feel like everyone is planning trips and trying to make up for the lost year and I'm in my kitchen like, hmmm, pizza or hot dogs tonight? You could say we've got big things going on here.

Speaking of big things, I got a new job! It's not remote, so I'm back to spending an hour on the train everyday, which is why I have way less time to spend writing and catching up on other blogs. It's only been a few months, and there have been a few snafu's, but for the most part I'm enjoying it. The commute is also the best it's ever been; I hope people who can work from home are allowed to continue working from home. I always get a seat, people rarely sit next to me, and the kids are out for the summer. Can it stay like this forever?

The commute is a grind, but it's gives me plenty of time to read. We're halfway through the year and I'm crushing my reading goal, so no complaints. I'm sure I'll be singing a different tune come November, but for now I'm going to blissfully pretend we live in northern California instead of eastern Massachusetts.

Brent still has no word on when he'll be going back to the office, and it's pretty nice having someone at home. Being able to text him to close the bedroom window when a storm comes out of nowhere, or to take the hot dogs out of the freezer that I forgot to defrost is pretty rad. I think the cats are finally accustomed to having him constantly around, too; when we both leave on the weekends for brunch or dinner plans, they look at us like, wait, who's going to be here to tell me how cute I am??

In the most exciting news of all, my jury duty yesterday was canceled. It was my fourth (fifth?) time being summoned and my group didn't have to report. I know, I really buried the lede.

Brigid
Not to start off on the wrong foot or anything, but the name's Brigid. Not Bridget. Or Brigit. I'll make it easy for you; my friends call me Brig (Bridge).